An Unknown Tragedy: The Armenian Genocide 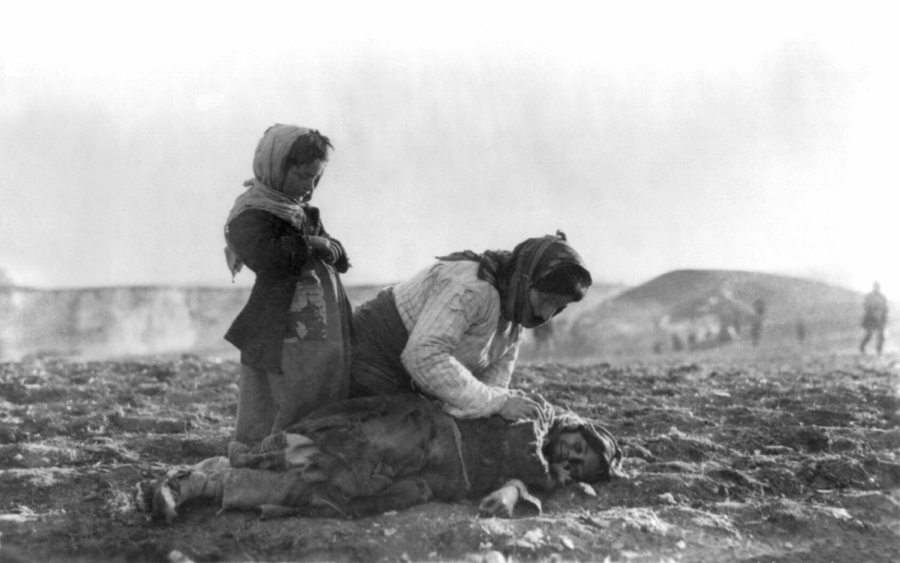 An Armenian woman kneels beside her dead child. Photo via Wikimedia Commons

Imagine a horrific event being described to you, in which over one million people were systematically murdered and deported by their government. Task teams were dispatched to execute this group of dangerous people who were supposedly undermining their nation simply by existing. That has to be the Holocaust, right? Unfortunately, no. This was a different genocide that took place within the Ottoman Empire, around the time of the first World War: what would come to be known as the Armenian Genocide.

During the fifteenth century, Armenia, a small middle eastern country, was integrated into the Ottoman Empire (modern day Turkey). The Muslim Ottomans permitted the Armenians to practice Christianity, but saw them as gavours (a Turkish word meaning “infidels” or “unbelievers”), so they treated them as such. The Turks and Kurds near the Armenians would overtax, rob, kidnap, and forcefully convert them to Islam without repurcussions. Armenians were allowed few political and legal rights. Though many Armenians were poor as a result, a small group thrived, achieving more success than their Ottoman neighbors. This, along with the Turkish fear that the ‘foreigners’ would pledge loyalty to another Christian nation, rather than their own Muslim one, made tensions run high.

The tension finally snapped in 1894 when a group of Armenians refused to pay an unfair tax. In retaliation, between 1894 and 1896, The Ottomans, killed thousands of Armenians in a variety of massacres. For the Armenian remnant, quality of life significantly decreased. In 1908, the “Young Turks,” a radical political group, overthrew the Turkish Sultan in order to create a nationalistic government intent on “Turkifying” the Ottoman empire. In their eyes, non-Turks were liabilities, and, as the Turks joined World War I, likely to be traitors.

Thus, on April 24, 1915, the Armenian Genocide officially began with the arrest and execution of several hundred Armenians. The Young Turks created the “Special Organization,” which dispatched kill teams who littered the Turkish countryside with bodies. David Fromkin, a historian, says “rape and beating were commonplace. Those who were not killed at once were driven through mountains and deserts without food, drink, or shelter. Hundreds of thousands of Armenians eventually succumbed or were killed.” In the interest of “Turkification,” the Special Organization kidnapped children as well, forcefully converting them to Islam and sending them to new, native Turkish families. The violated women were forced into servitude either in Turkish harems or as slaves. Empty Armenian homes were simply taken up by Ottomans. Over the years, between 600,000 and 1.5 million Armenians died from exposure, murder, execution, and starvation. These events were so greusome that they inspired the coinage of the term “genocide,” (from the Greek genos, meaning “race,” and -cide, denoting killing) originally created by Raphael Lemkin, a Polish-Jewish lawyer.

Until very recently, the United States was reluctant to put a name to the atrocities that occurred within Turkey, as they are now an important US ally. However, a US Congressional panel finally voted in March of 2010 to recognize the genocide for what it was. On October 29, 2019, the US House of Representatives passed a resolution to the same effect. Yet, in modern-day Turkey, even acknowledging what happened to the Armenians in the early 20th century is considered a crime, known as an “insult to Turkishness.” While the Turkish government concedes that deportation occurred, they claim it was necessary for national security; and the official stance is that, though some killings did occur, they were not sanctioned by the government. There is not much more that we can do today but hope that gently applying pressure will get the Turks to relent.